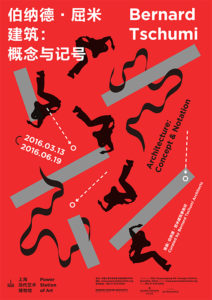 Bernard Tschumi: Concept and Notation, the first Chinese retrospective of the legend Swiss architect opened in Shanghai. This exhibition is supported by Pro Helvetia Shanghai at Power Station of Art.

Bernard Tschumi: Concept and Notation explores Tschumi’s multi-identities as a theorist, educator, and architect, showing around 350 pieces of important sketches, manuscripts, collages, models. Many of which are displayed in public for the first time.

The exhibition brings into focus Tschumi’s insistence that architecture, before becoming the knowledge of form or even visual effect, is first and foremost a form of knowledge.

Bernard Tschumi
Bernard Tschumi is a world-renowned architect, writer, and educator. Born in Switzerland, he now works and lives in New York City and Paris, and is a certificated architect in both countries. For a long time, Tschumi served as the dean of Columbia University’s Graduate School of Architecture, Planning and Preservation. He has practiced in both New York and Paris, and often wins awards in major design competitions around the world. His fresh design ideas have brought big impacts to the architectural field around the world.

His notable projects include the Parc de la Villette in Paris, France, the Tokyo National Theater, the Vacheron-Constantin Headquarters and Manufacturing Center, the New Acropolis Museum in Athens, Greece, and the Museum for African Art. In addition, Tschumi is also an author of theoretical publications, and has held joint exhibitions with other architects. His fresh and unique architectural ideas have had great influences on the new-generation architects.