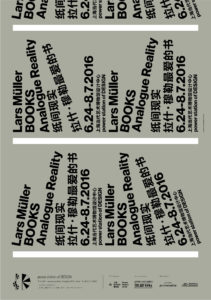 “Lars Müller BOOKS Analogue Reality”, supported by Pro Helvetia Shanghai, features 100 books all published by the internationally renowned Swiss publisher and designer, Lars Müller. Since 1983, he has been presenting books on architecture, design, typography, photography, and social issues that impress with their consistently high design quality, always investigating thoroughly the best style and materials with his keen acumen.
Müller’s words, “For me, a book is special when I’ve succeeded in harmonizing its content with its design, and both are good. Nothing is worse than weak content concealed by good design,” clearly shows his attitude towards book design and book publishing. Also, he has a strong conviction that “there is no digital replacement in sight for the book and its comforting physicality, its formal variety, and the sensuality of its perception.” Please walk around the world of books, each created carefully by this book-specialist designer/publisher, pondering how the book fits into our world today, and which way it is trying to face towards the future.

Lars Müller was born in Oslo in 1955, and although a Norwegian citizen, has been based in Switzerland since 1963.

After an apprenticeship as a graphic designer and some years as a peripatetic student in the United States and Holland, Lars Müller returned to Switzerland in 1982 and established his studio in Baden. Since 1996, he has been a partner of “Integral Concept,”an interdisciplinary design group active in Paris, Milan, Zürich, Berlin, and Montreal.

Lars Müller started publishing books on typography, design, art, photography, and architecture in 1983 and, as Lars Müller Publishers, has produced some 300 titles to date. Recently, he has branched out into visually oriented books on social issues, such as human rights and ecology.

He is a passionate educator and has taught at various universities in Switzerland and elsewhere in Europe. Since 2009 he has been a guest lecturer at Harvard’s Graduate School of Design. He is currently the international president of AGI Alliance Graphique Internationale and a member of MOTOVUN International Publisher’s Group.