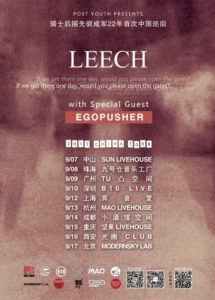 For the first time in 22 years since its founding, Leech – the forefather and creator of the instrumental post-rock scene, is visiting China on its grand tour to 10 cities in renowned livehouses and clubs.

Since the first release of their album “Instarmental” in 1997, Leech has continued to develop in every musical respect and enchants its fans more than ever with its breath-taking and intoxicating music.

Danceable melodies, eccentric tones and delicate soundscapes combined with magnificent, perfectly balanced audio-visual effects catapult the listener into spheres of indescribable emotion. Leech delights an exceptionally wide audience, especially with its live performances. At national events such as the Bergmal Festival or the 25-year KiFF Festival, Leech thrills the crowds, and is in greater demand internationally than ever before. With appearances in Russia, Czech Republic, Poland, Germany and Austria, Leech has built an international fan base and has – not without good reason – been named ‘the most underrated band ever’.

Leech is still working tirelessly and passionately on a new album. This is expected to be released in autumn 2017 and promises new music to send a shiver down your spine.

Egopusher is a Swiss band in which Tobias Preisig plays Violin/ Moog Bass, and Alessandro Giannelli plays Drums/ Synth. They were invited by Pro Helvetia Shanghai to launch their Chinese premiere last April at Strawberry Festival in Beijing and Shanghai. On occasion of the release of their new single “Patrol” this May and their debut album “Blood Red” this October, they were invited to tour with Leech on their China Tour this September.

Working in their very own sound laboratory, called “the basement diary”, the duo has experimented with a near-Darwinian formula to arrive at their striking pieces. Contrast and contradiction are at the very core of Egopusher, an unlikely but magical amalgam of lyrical and yet somehow obstreperous violin, and earthy drum sound. At first, Tobias Preisig and Alessandro Giannelli have very different musical background. Ever since their paths crossed, Switzerland has been gifted with a fabulously playful and radical new band unafraid to tease, provoke and shock.

Over the course of several months, Preisig and Giannelli recorded a series of improvisations on violin and drums, adding touches of synth and bass later on. In this way they created a kind of diary, capturing and observing the successes and failures alike of their interplay. Several months later, they sat down to listen to these basement diaries and to decide which of the entries deserved to be developed into a song. This survival of the fittest strategy perfectly fits the curious word creation that is the band name, Egopusher: Dig deep inside for the best in you, bring it out and polish it until the sparks fly.