Lecture: A Journey Around the Swiss Clock and Beyond: From Research Programme to Exhibition Project
Date: July 24, 2020, 4-5pm
Speaker: He Yining

Photobook publishing has been an important part of the history of photography and the visual culture of Switzerland since the late 1920s. For about eight years Pro Helvetia has begun funding photobook projects with the aim of promoting the creation, production and distribution of Swiss photobooks in a way that reflects the dynamic development of the industry, and has since supported the publication of more than 50 books. The exhibition “Swiss Photobooks in China” features a selection of 29 photobooks published in Switzerland and abroad whose contents cover a wide range of themes and visual languages in Swiss photography from the late 20th century to date.

Swiss photographers have long been drawn to the changes in the geographic, social and everyday landscape of the federal republic, which is known for its natural beauty, rich culture, and unique customs. Snow Parks is a collection of photos from artist Philippe Fragnière’s thesis project at the École cantonale d’art de Lausanne (2012) and subsequent works; it depicts snow parks in Switzerland as a coherent landscape in the process of constant assembling and reorganization. As Time Goes By 1982 1988 1997 2014 by Barbara Davatz features portraits of 12 couples, whom the artist photographed first in 1982 and then in 1988, 1997 and 2014; aside from the changing backgrounds, ageing is an important theme that ties the images together.

As explorers of the world, Swiss photographers have left their footprints all over the globe just like their ancestors. The Jungle Book, which won the Dummy Book Award at the Rencontres d’Arles in 2015, is documentation of photographer Yann Gross’s artistic pilgrimage along the Amazon River, which demystifies the exotic landscape and takes a close look at the living conditions of the indigenous people in today’s world. Matthieu Gafsou’s H+ presents an ongoing dialogue between photography and transhumanism, in which the artist is able to create a detailed map of the transhumanist revolution through 4 years of research that took him from Switzerland to Russia, France, Germany, and the Czech Republic.

In addition to the two shows at abC 2020 in Beijing and Shanghai, “Swiss Photobooks in China” will also travel to the Design Society (Shenzhen), Modern Art Base (Shanghai), and the Three Shadows Photography Art Centre (Beijing) later this year an exhibition program initiated by Pro Helvetia Shanghai, Swiss Arts Council.

More details on the photobooks supported by Pro Helvetia on the website https://prohelvetia.ch/en/dossier/photo-books/ 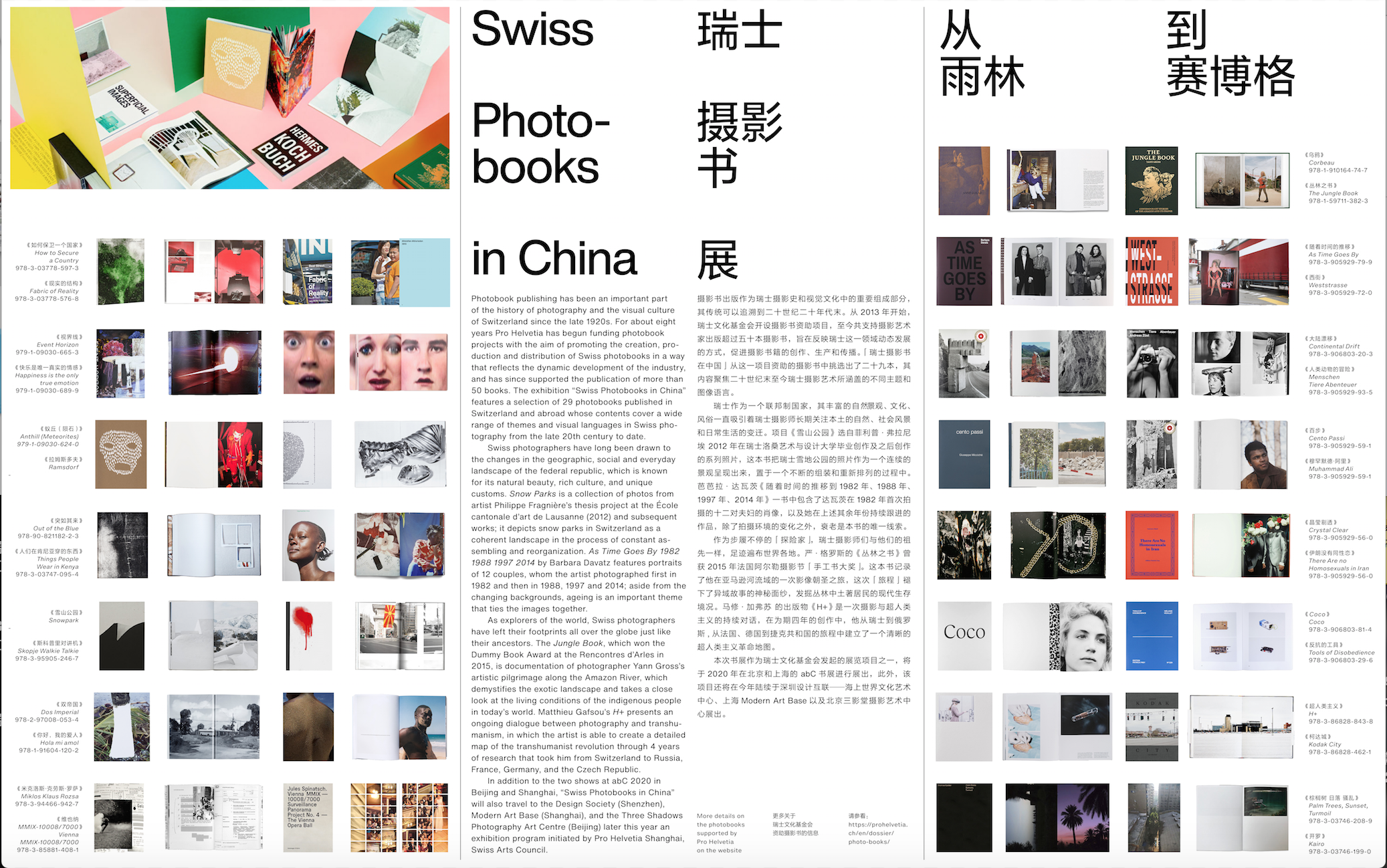 Founded in 2015, abC has dedicated to promote local artist’s books and independent publications in China as well as introduce excellent global publishers and institutions to establish a profound multilateral dialogue. As the most professional exhibition of artist’s book and expo of independent publications, abC Art Book Fair takes place in Beijing and Shanghai respectively for now.