Based in Geneva. Is one of the artists awarded a 2020 Pro Helvetia Residency and was scheduled to stay in China from May to July 2020.

Due to Covid-19, Bogana’s residency has been rescheduled to a combination of stay-at-home format that takes place from October 1-31, 2020, and a two-month live residency in China in 2021.

Home-Not-Alone residency
More about the artist

Geneva-based Alan Bogana has completed his one-month Home-Not-Alone residency in Switzerland, and will embark on another two-month live residency in China when the situation allows. During his home residency, he conducted a futuristic research on notions of Qi and Meridians in traditional Chinese medicine. His remote conversation with his critical friend from Chronus Art Center and experts in the field helped him find out how modern people visualize these ancient notions of energy and light flows inside our bodies. Combined with studies on the use of lasers in acupuncture and in motion capture techniques, he tries to animate a ghostly human being made of light with laser beams emitting from the meridians. These sketches will further develop into a video essay next year during the second part of his residency. Let’s hear from his own experience:

This month of home residency allowed me to start a project that I have been wanting to dive into all year long, now in a renewed and adapted form. The weekly discussions with my critical friend Vytas Jankauskas, head of Research/Creation at Chronus Art Center in Shanghai, have been extremely useful and inspiring. They framed the residency, gave a rhythm to my activities and enriched my research. We exchanged on different aspects, spanning from new media art practices in China to more specific topics related to my project. During the month of October, a second wave of Covid-19 infections hardly hit Geneva, where I’m based, bringing to its partial shutdown during the whole month of November. This situation pushed me to limit in-person contacts and to concentrate on studio-based activities.

During this month of home residency, I focused my research on three main topics:

The first topic concerns the notions of Qi and of Meridians in traditional Chinese medicine. These ancient notions, which conceive the body as a sort of “electric circuitry” have intrigued me for a long time. For my project, I’m especially interested in how people in China nowadays imagine and visualise in their mind these ancient notions, and how these notions coexist with contemporary practices. I was wondering if we could imagine the Qi as flows of energy, or even of light, that passes through the body. I had the opportunity to interview a doctor from Shanghai on the notion of Qi and on how to imagine and to visualize it. The exchange also brought to further inspiring questions, like how the Qi behaves in the absence of gravity, for example in the body of astronauts in space, and if traditional Chinese medicine could also be used in space and for which purposes.

A second topic I focused on concerns the use of lasers in traditional acupuncture, where needles of light are used instead of needles of metal. This is a relatively recent development of this ancient technique, which seems to be spreading in different countries around the world. Several scientific papers exist on this recent development, and I’m eager to meet specialists who use this method.

Third, and actually rather technical topic is the use of the motion capture technique to animate 3d characters in computer graphics imageries.  During the residency, I started to explore this technique in order to animate an avatar that would become the protagonist of a new work. In the past, I used computer graphics imagery quite often in my projects, and it does even make more sense now during this home residency situation. Thanks to Vytas, I exchanged with a company based in Hong Kong, specialized in this technique, about some ambitious ideas that I want to develop involving the motion capture of indoor skydiving performances. Work in progress!

Over the weeks, I started to develop and to design an immaterial avatar. A human silhouette made of light flowing through the meridians of the body as well as light emitted from different parts of the body. At the moment, this avatar is an empty shell and it will be animated by means of motion capture data. Abstract flows of light will soon narrate a story, based on a scenario, which will investigate on the multiple relationships between light, the human body and technology. I’m not sure yet who or what this avatar is: a superhero?  the ad for the latest coolest gadget? A post-human being made of pure energy?

I’m sharing here some sketches inspired by multiple uses and misuses of lasers, in order to show you where my intuitions are bringing me as well as the process behind the project. The final animations will become a series of new artworks and they will also be integrated in a video essay that I’m going to shoot next year during the second phase of the residency.

I’ve been using lasers in my works in many different ways, from making holograms to mimicking the scintillation of stars in the series “Journeys of Light”, where night skies of the future are depicted. In the evolutive collage “Polarizing Times” (2020), I’ve also explored the visual culture of this technology by means of found images.

Lasers became very common in the last decades and thanks to some gadgets, they can also be decorative extensions on the human body. For me, this idea connects to some primeval desires, utopias and paradigms. For instance, the ancient Greeks thought that visual perception was based on beams emitted by the eyes. 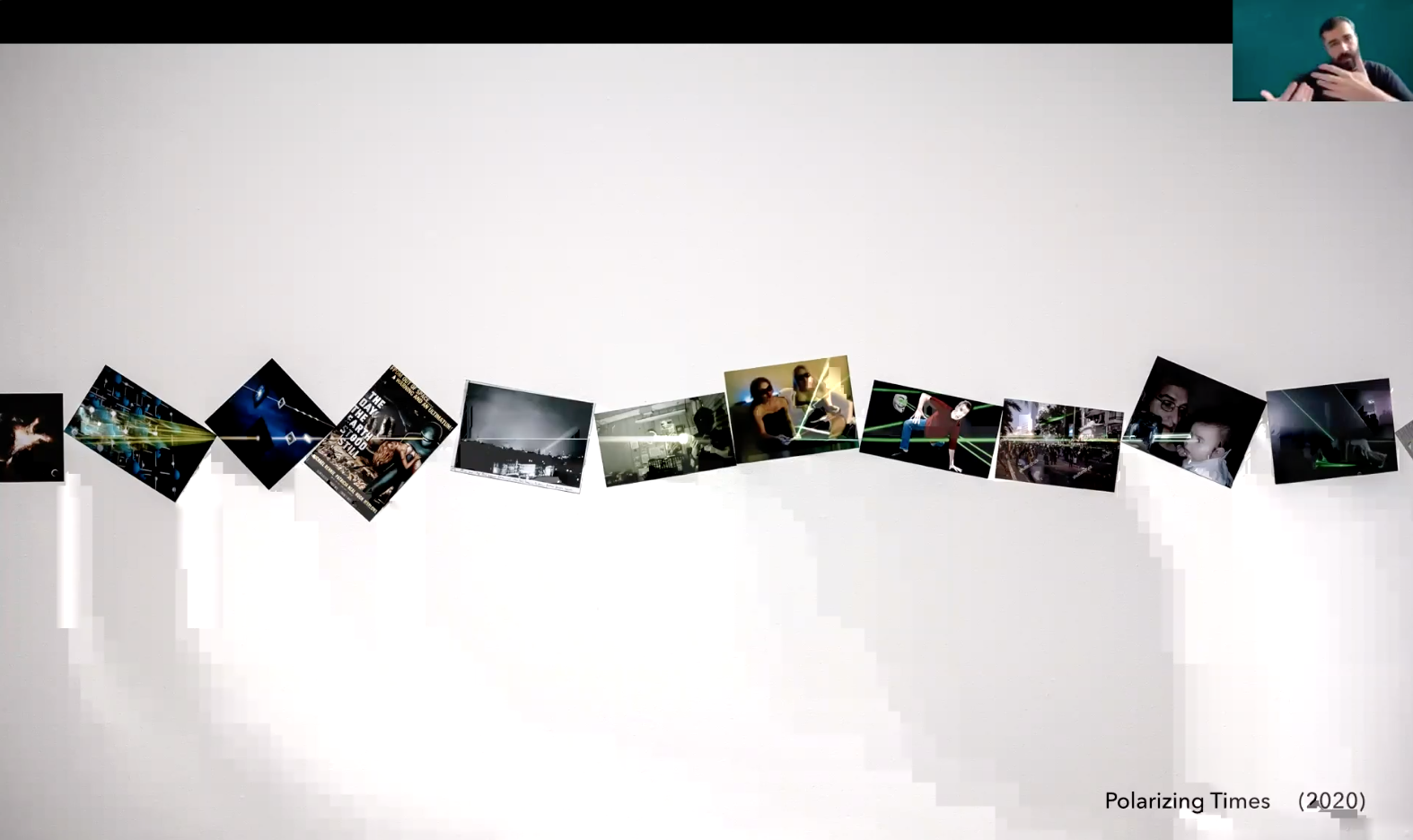 Toward the end of my home residency, I was invited by Vytas to give a short Zoom-based Artist Talk at the Chronus Art Center-Lab in Shanghai. This was a great way to end this first phase of residency. I received some preliminary feedback on my ideas, precious references and remotely met people, that I hope to meet in person next year.

During the live phase of the residency next year, I will focus on a series of complementary topics, which will enrich the research done so far. More specifically, I will research the Chinese space program, indoor skydiving culture, light pollution, its impact on the relationship of Chinese people with the night sky, and electrical blackouts. These topics personally relate to what I call the “utopian imagination” as well as the downsides of technological development. These subjects might sound disparate and disconnected from each other and my target will be to weave them together by means of various converging narratives, in the form of new works.

An artistic residency usually consists of multiple experiences, unexpected encounters, serendipitous findings, last-minute decisions as well as breathing the air and walking the streets of places we probably didn’t know before.  This home residency has been some sort of creative implosion with limited forms of remote-sensing and remote-exploring. China felt far, nonetheless, I was able to travel with my mind and this month of October 2020 has been extremely productive!