Geneva-based Alan Bogana has been selected for Pro Helvetia Shanghai’s residencies program. Before his arrival, he is invited to participate in UCCA Dune’s exhibition “Space Oddity”.

In his 1971 short story “The New Cosmogony,” science fiction author Stanisław Lem describes a new model for the universe: the universal phenomena and natural laws detectable to humanity are all the product of a previous universe’s operations and rules; “perfect nature” does not exist, because nature was also formed by this process. Although the feasibility of proving this hypothesis remains to be seen, Lem reminds us of an indisputable fact: “nature” is far more complex and mutable than we imagine, and time is not a linear forward march. As such, continued insight into the universe allows us to escape the limits of anthropocentrism. As one of the Earth’s many inhabitants, humanity has an ineluctable fate—the evolution of a planetary consciousness, one that transcends state, religion, race, and species.

The exhibition “Space Oddity” brings together twelve artists and groups who adopt a more planetary perspective in their practice. They confront the dispersal of identity, a byproduct of the constantly accelerating operational systems of human civilizations today, and trace the formation of a collective unconscious. The allegorical works revolve around this pale blue dot in the universe, revealing our planet’s traumas and memories, hopes and disappointments. The artists explore various organic systems, transforming their individual experiences into strange objects of perception. Their works are a reflection on the operational mechanisms of our society and mark a new struggle against the frustrations of our limited knowledge.

Bogana’s installation “Transmutations” (2016), inspired by the novel Solaris by Stanislaw Lem, executes a site-specific light choreography. These light sources create an abstract narrative and a composite projection, which engulfs the exhibition space completely. 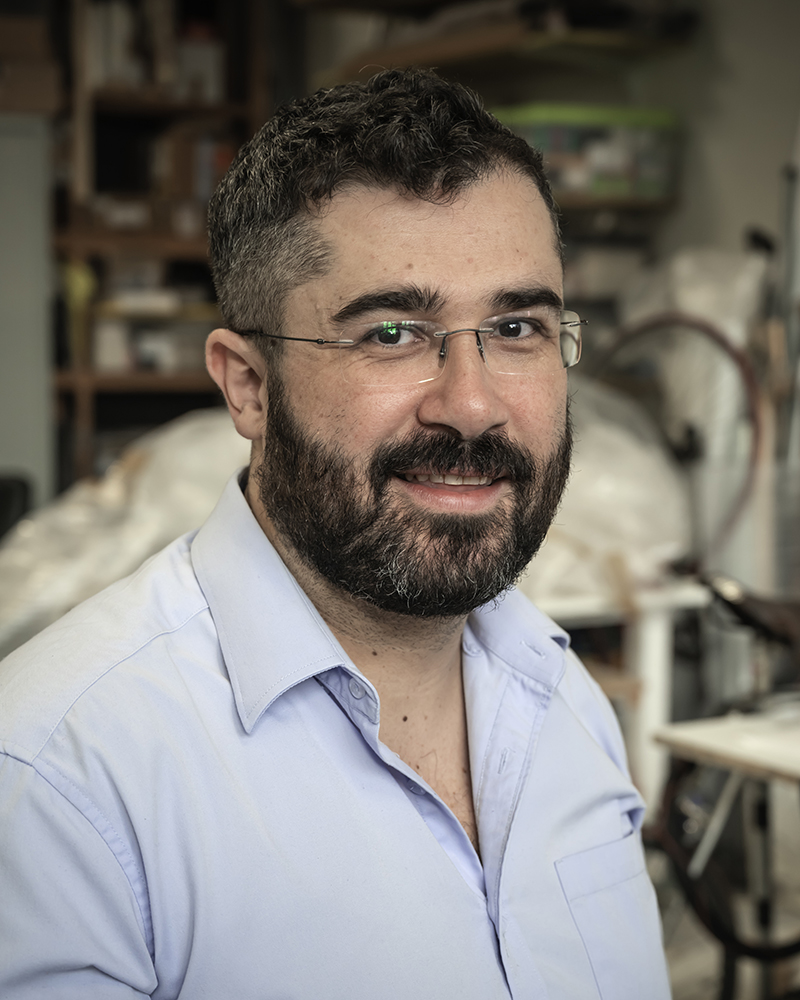 Alan Bogana was born in 1979 in Switzerland. He’s a pluridisciplinary artist based in Geneva, Switzerland. His art practice involves sculpture, computer graphics, electronics, time-based media and holography, and his works are usually presented in the form of installations.

During the last years his research has focused on the exploration, real and fictional, of the behavior of light and its interactions with matter. He investigates this broad field of study through various means, such as computer graphics simulations of impossible phenomena or the manipulation of translucent, phosphorescent and holographic materials.

He completed a Fine Arts Diploma with honors at the Geneva University of Art and Design, a specialization in computer graphics and one in artistic research methodologies at the Zürich University of Art and Design. He exhibited in Europe, in the United States, in the Emirates and in South Africa. He has been artist-in-residence at the Swiss Institute in Rome, at the Cité Internationale des Arts in Paris, at the Sommerakademie Zentrum Paul Klee in Bern, Pro Helvetia Johannesburg in Cape Town, and with the Landis & Gyr Foundation in Zug.