The project “Blue Cables in Venetian Watercourse” features artwork produced within the contexts of residency, commission, open-call, and commercial collaborations between artists, tech companies and scientific research institutions. Through data analysis and a detailed examination of archives, this online exhibition unfolds the hidden patterns that distinguish relationships between art, science, and technology. The project’s research subjects encompass multi-layered production materials, ranging from sketches and diagrams to communications between artists and institutions and administrative documents. The project hopes to analyze how the transformation of production relationships could inﬂuence the trajectory of art, and to provide speculative production models. It also establishes a long-term online mechanism, a “ghost observer” who follows emerging practitioners in this ﬁeld. This will serve as an online archive, presentation platform, research resource, and think tank.

The online residency program invites 17 groups of artists. Instead of being “production-driven,” it is “process-driven.” We don’t anticipate artists will finish their artworks during the residency. Instead, research materials, new concepts, exchanges, and discussions that occur during the residency period are all considered “output” of this program. The participants will also make full use of the advantage of internet connectivity: they will be expansive and self-organizing, as well as endeavor to spread the information across their communities via lectures, tech demos, and so on. This program will also focus on how online resources and community work can help artists realize their ideas.

The lecture series is composed of three parts, taking place in April, May and June respectively. During the residency period, we have invited curators, researchers, producers and artists who are active in the field of art, science and technology, to share their experiences on mechanisms, toolkits and interdisciplinary exchanges and communication. The lectures are open to both the residents and practitioners in the field and will become a dynamic part of the long-term research of the “Blue Cables” project.

“Blue Cables in Venetian Watercourse” is one of the ECP 2O2Online Selected projects of Power Station of Art, Shanghai (PSA). Among the series, the sessions by Swiss speakers and tutors are supported by Pro Helvetia Shanghai, Swiss Arts Council.

Consecutive translation is provided for the lectures. 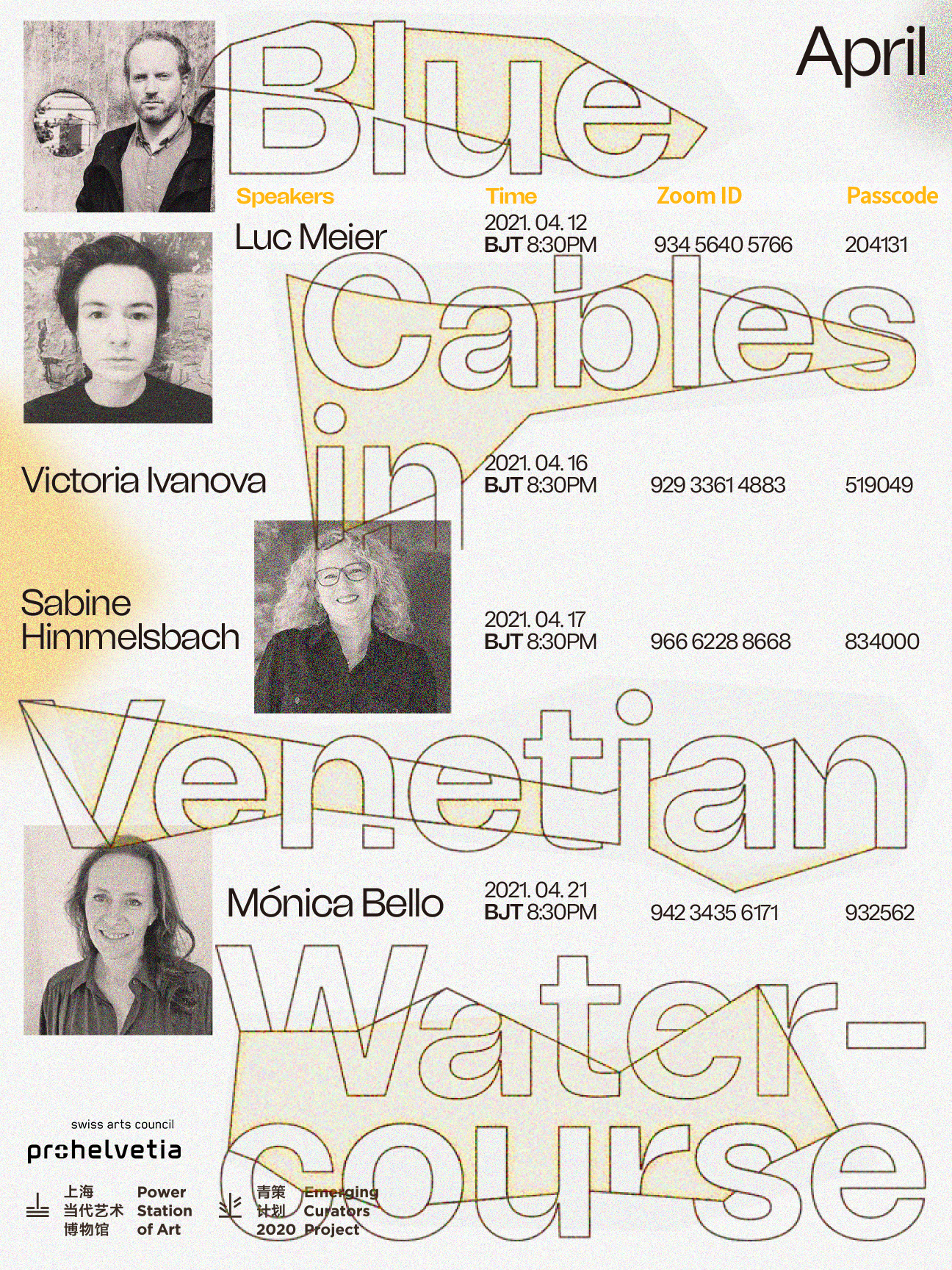 Luc Meier (born in 1981) studied international relations in Geneva. He then spent over ten years abroad, working on cultural projects in Japan and in the United States, most of them focusing on the intersection of art and technology.

From 2008 to 2012, he developed swissnex San Francisco’s and the Swiss Arts Council Pro Helvetia’s common art and technology program and directed it out of San Francisco, developing projects in the fields of media art, contemporary art, sound art, design and architecture in the Bay Area, in Los Angeles, and in New York.

Upon his return to Switzerland in 2013, Luc coordinated the curatorial development of ArtLab at EPFL, the Swiss Federal Institute of Technology in Lausanne, and was its director of programs until June 2018. Now renamed EPFL Pavilions, ArtLab is programmatic and architectural initiative that brought together art, science and technology on the campus of EPFL, in an exhibition infrastructure designed with architect Kengo Kuma.

Since 2018, Luc is the director of La Becque | Artist Residency in La Tour-de-Peilz, Switzerland. Located on an exceptional slice of lakeside land on the shores of Lake Geneva, La Becque hosts and fosters the creativity of artists of all backgrounds and disciplines. Residents benefit from an exceptional site and infrastructure, conducive to accomplishing the project they have been selected for, whether it is focused on in-depth research or on production.

La Becque dedicates particular attention to projects exploring the ever more intertwined notions of nature, the environment, and of technology. At the core of contemporary preoccupations and of growing urgency, these themes feed into all disciplines of the arts – and artists are among those best equipped to map out alternative relationships to both technology and nature.

Since 2012, Sabine Himmelsbach has been the director of HeK (House of Electronic Arts Basel). After studying art history in Munich, she worked for galleries in Munich and Vienna from 1993–1996 and later became project manager for exhibitions and conferences for the Steirischer Herbst Festival in Graz, Austria. In 1999 she became exhibition director at the ZKM | Center for Art and Media in Karlsruhe. From 2005–2011 she was the artistic director of the Edith-Russ-House for Media Art in Oldenburg, Germany. In 2011, she curated ‘gateways. Art and Networked Culture’ for the Kumu Art Museum in Tallinn as part of the European Capital of Culture Tallinn 2011 program. Her exhibitions at HeK in Basel include ‘Ryoji Ikeda’ (2014), ‘Poetics and Politics of Data’ (2015), ‘Rafael Lozano-Hemmer: Preabsence’ (2016), ‘unREAL’ (2017), ‘Lynn Hershman Leeson: Anti-Bodies’, ‘Eco-Visionaries’ (2018), ‘Entangled Realities. Living with Artificial Intelligence’ (2019), ‘Making FASHION Sense’ (2020) and ‘Real Feelings. Emotion and Technology’ (2020). As a writer and lecturer, she is dedicated to topics related to media art and digital culture.

Mónica Bello (born 1973) is a curator and art historian based in Geneva, Switzerland. Over the last 15 years she has focused on the crossovers between disciplines, and the role of art and science in contemporary society. In her curatorial projects she discusses the way artists detect and instigate conversations around emergent cultural phenomena, and the role of science and technology in the perception of reality. Since 2015, she has led Arts at CERN at the European Organization for Nuclear Research in Geneva. At CERN she directs that art programmes, curates the artistic residencies, the art commissions and exhibitions. In 2018 she was guest curator of the prestigious Audemars Piguet Art Commission, presented in Art Basel. Prior to her arrival to Switzerland she held the position of Artistic Director of VIDA (2010-2015) at Fundación Telefónica, Madrid, a pioneering award that fostered cross cultural expressions around the notion of life. She initiated and ran (2007-2010) the Department of Education at Laboral Centro de Arte, Gijón (Spain). She has curated exhibitions and events internationally supporting creators and researchers from different fields and backgrounds. As an internationally recognised figure within art and science networks, Bello is a regular speaker at conferences and participates in selection committees, advisory boards and mentorship programs. In 2022, she will curate the Icelandic Pavilion for the Venice Biennale. 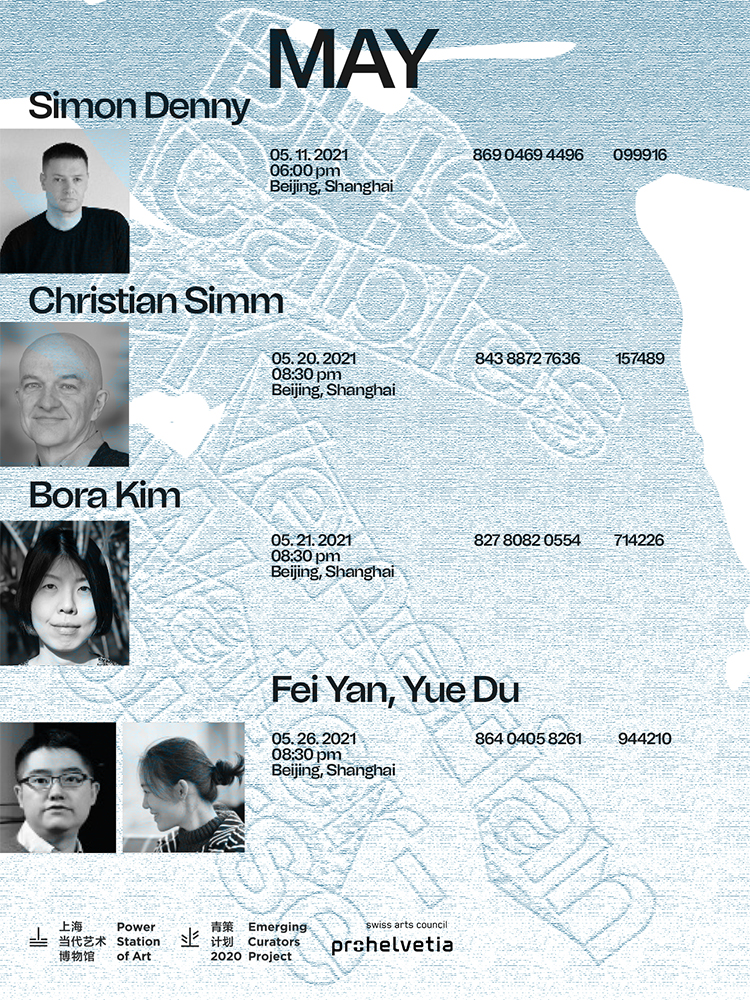 Christian Simm has joined the University of Zurich in August 2020 to lead its Global Affairs. Between 2017 and 2020 he was CEO of swissnex Boston New York and Switzerland’s Science Diplomat for the Eastern part of North America.

Prior to Boston, Christian spent twenty years in San Francisco where he launched various initiatives to foster high-level exchanges between Switzerland and North America, in research, education, innovation, design and at the intersection of art and science & technology. Following his vision « from foresight to insight to action », and with partnerships from both the private and public sectors, he launched the swissnex concept and brand. The swissnex network now has offices in many of the most innovative locations worldwide and is recognized internationally for its very unique and successful approach to « connecting the dots ». Christian created and led swissnex San Francisco to become a spectacular interdisciplinary ecosystem in an iconic location at Pier17.

Christian is the author of numerous articles, a regular guest-speaker, an individual member of the Swiss Academy of Engineering Sciences and was for several years on the board of Leonardo, the International Society for the Arts, Sciences and Technology. He is on the board of directors of EHL Advisory Services in Lausanne and an expert both for Pro Helvetia and for the ArtTech Foundation. He holds a doctorate in physics and was nominated “Une des 100 personnalités qui font la Suisse Romande”, as well as one of Switzerland’s ”100 Digital Shapers“ in 2018 & 2019. 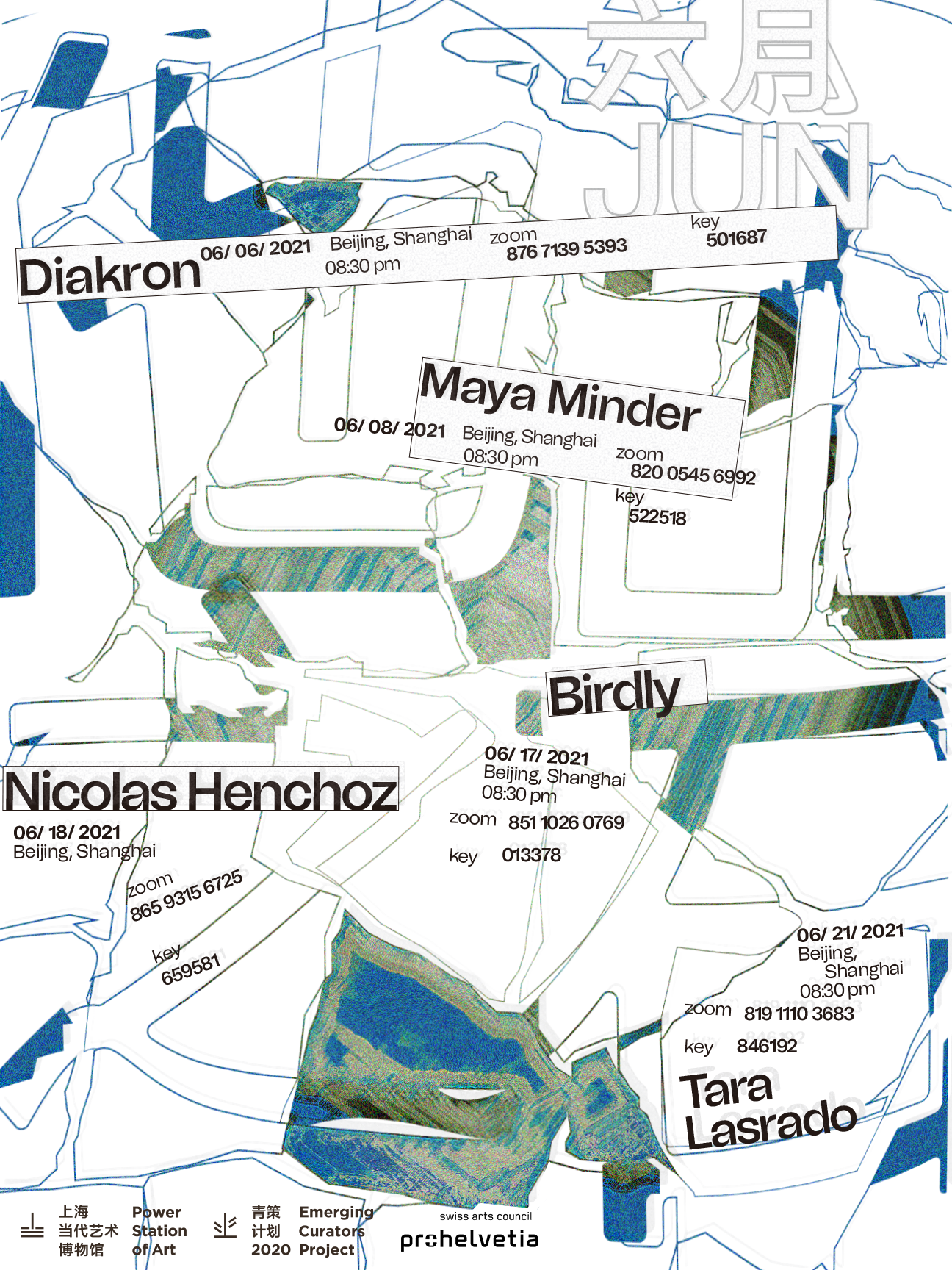 Born in 1983, lives and works in Paris and Zurich.

“Cooking thus transforms us”, is a framework Maya Minder weaves like a string through her work. Cooking serves her to reveal the metaphor of the human transformation of raw nature into the cooked culture and she combines it with the evolutionary ideas of a symbiotic co-existence between plants, animals, and humans. She creates entanglements between human commodities and the animism of nature. A table of diversity, not yet digested. Following the Biohacker, Maker and Thirdspace movement she uses grassroots ideas, safe zones and citizen science into her field to enable collective storytelling through food, art, science and cooking.

Exhibitions and grants: Ars Electronica AEGardens Piksle, Pro Helvetia, Werkbeitrag 2018 + 2020, KADIST AWARD 2017 (nomination), Part of the Klöntal Triennale 2017, Kunsthalle Zurich. Several grants and support from Migros Kulturprozent, Pro Helvetia, Gubler Hablützel Stiftung and Gerbert Rüf Stiftung. She is also a curator and organizer of projects and festivals independent and in co-production with the International Hackteria Society. She studied Art history at the University of Zurich and MA Fine Arts at Zurich University of Arts.

Max Rheiner is CEO and founder of the company SOMNIACS AG, a Spin-Off of the Zurich University of the Arts (ZHdK), which transformed the research project ‘Birdly’ into a commercial product. Further he has been teaching in both the bachelors and masters programs for the Department of Interaction Design, since 2006. He received his Diploma from Zurich University of the Arts in the field of New Media Arts, in 2003. The main areas of discipline that he specializes in are Immersive Experiences, Embodied Interaction and Physical Computing. Of these topics, he conceived and developed the Physical Computing Laboratory for the Department of Interaction Design and is currently running the Immersive Experince Lab since 2016.

His research and artistic interest center on interactive experiences which utilize methods from Virtual/Augmented Reality and Immersive Telepresence. Moreover, his artistic work has been recognized and exhibited in a number of international and well-renowned venues such as the Museum of the Moving Image/USA, Sundance Film Festival/USA, Biennale Venice/Italy, Ars Electronica Linz/Austria and Yamaguchi Center for Arts and Media/Japan.

Nicolas Henchoz is the founding director of EPFL+ECAL Lab, the design research centre of the EPFL created in collaboration with the ECAL ( Art and design university, Lausanne). He has a first scientific background in material science, then as journalist, writer and art director. In 2000, he came back to EPFL as member of the presidency, where he initiated the collaboration between technology, art and design.

He started to develop a new vision of design research. His book Design for Innovative Technologies, from Disruption to Acceptance (Routledge, 2014) defines a unique approach about how technologies can be turned into impactful user experiences. He has curated more than 30 exhibitions featuring his project in institutions like Harvard University, the Musée des arts décoratifs and the Centre Pompidou in Paris, the American Institute of Architecture in NYC, or the Royal College of Art in London. The research outcomes of the EPFL+ECAL Lab have led to several major academic contributions like ISMAR, HFES, Siggraph or Leonardo. List of awards includes the International Design Festival Berlin, Design Prize Switzerland, the Best app of the year (Splash Award) and last November, the Best user experience award at the Meilleur du web. He’s a visiting professor at the Politecnico di Milano and board member of the Global Alliance for Media Innovation. He has been distinguished Chevalier des arts et des lettres by French minister for culture and communication.

Tara Lasrado is a Swiss independent producer and curator particularly interested in working on experimental, collective and interdisciplinary collaborations. Since 2013 she has been active in various projects including Manifesta Biennial of Contemporary Art in St. Petersburg and Zürich, AKI AORA artist residency in Tulum, Forward Festival Zürich, «Fun & Fury» performance program at Cabaret Voltaire; and Progetto 6000, among others. Currently, Tara is the vision director of arvae, cultivating authentic collaboration between artists, scientists and regional (environmental) experts to explore and address the environmental crisis. She is also the production manager of experi_theater Zürich, an experimental performance group working at the interface between art and activism, and a co-producer of «under the mango tree» in Shantiniketan, India (2020) and Borikén (2022), a self-organised gathering of unlearning that focuses on indigenous and land-based learning, rural and performance practices.

Shi Zhen Selected for Residency in the Verzasca Valley 2021