Born and based in Yunnan Province. Focusing on his hometown, his works are usually based on long-term field study. He is the recipient of Abigail Cohen Fellowship in 2017 and Shiseido Photography Award in 2015. With our support, Cheng has completed his studio residency at Gleis 70 in Zurich from April 6 to June 27, 2021.

His residency proposal “The Rivers Between” discloses the forces shaping the natural/ social/ historical landscape. With videos, photos, installations and his body as media, Xinhao explored the relations between knowledge and perception, between Switzerland and his homeland.

More about the artist

On May 13, 2021, I took two trains from Zurich to the source of Rhine in Oberalppass near Andermatt and commenced with my hike along the Rhine. In my original plan, this excursion was merely a start: in the following years, I would start from the source and proceed with my hike in stages to the mouth of Rhine in Rotterdam. And with this stay in Switzerland, I planned to finish the stage from the source to Strasbourg in France in about three weeks, in the meanwhile picking up rocks upstream and carrying them downstream, leaving them there and start another round with new stones. In this way, I threw away as well as picked up all along the hike, while recording via camera what I saw and felt every day. 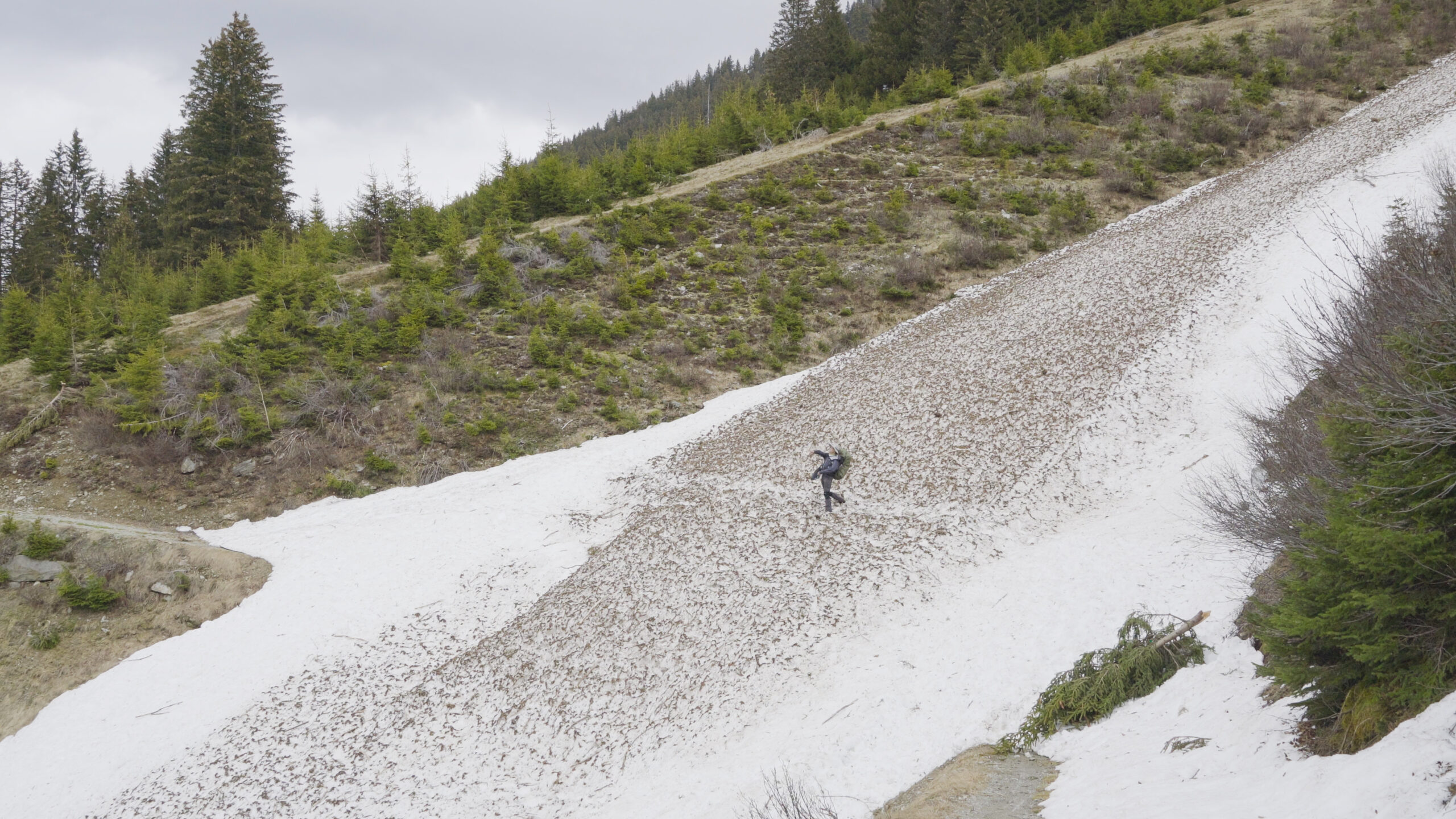 What I experienced upon the commence of this excursion, however, is an encroaching and distressing debacle.

Perhaps the root for this debacle is that I planned this hike from my past experience in Yunnan. A year and a half ago, I had accomplished a similar hike in my hometown: 449 kilometers along a railroad in 19 days from Kunming to the border between China and Vietnam. Even though my knees were stinging from the long-distance load, I had dragged my body and the rocks to the end of the walk and had recorded my journey with more than 30,000 words of email on my cell phone. Except for railways and the places I knew well, all the rest in that journey had been pure adventures — unexpected encounters with people of different walks, or cows, sheep, dogs, squirrels, weasels, and civet cats… The settling past over a hundred years of modern Yunnan history gained an upper hand and emerged from such experience, reincarnating into the reality before my eyes. I had assumed that this Rhine hike, even if with ups and downs, will eventually end with completion step after step, culminating in an unforeseeable but ultimately meaningful journey. However, reality slipped towards an unexpected turn over the course.

The sublimity of Swiss mountains was breathtaking. Confronted with towering snow mountains in such great scale with such intimacy, it seemed that all the experiences from existing words became unmatchable, trivial to the extent of dislocated, and paled in front of this soul-stirring surreality. But as the degrading stream surging forward, the bulky body of mountains faded into the background, receding behind the sky, the clouds, the forests, and the grassy slopes, intricately woven together with the emerging fields, pastures, and settlements, into a picturesque unity dubbed with the sough of breeze, the swish of brooks, and the clonk of cowbell. The elements were arranged just to the point in so far as the appropriateness rendered the upcoming scenarios predictable and unsurprising. I came to realize that what I was looking at was not wilderness, but an artifact produced and preserved according to a viewer-friendly formula. The trail hikers tread on allowed them to feast on nature whereas not threatened by it. Without the sense of powerlessness generated by being flung into the wilderness, the viewers only cast a distant gaze from a proper viewpoint; pay-sage, viewing and its object were fundamentally split. Another step forward unveiled the forthcoming scenery, yet my gaze was meticulously specified by the predetermined trails under my feet. In Switzerland, I was amazed at how over compassing the specification could go into: every accessible place, every mountain path, is mapped and updated in real-time. Which ones are for bikes, which ones are passable on foot, which ones were wheelchair-accessible, what is the distance, traveling time to the villages in the most vicinity, whether there are seasonal landslides and avalanches at the moment, and if so, where to go around them… All are meticulously marked on a standardized map of the Swiss territory. Gradually, I began to wonder which came first, the abstraction of symbols or the tangible reality, and which was more real? This slight split pushed me out of the present moment into constantly recalling my memories and experiences in Yunnan’s wilderness: following the general direction I had searched in advance, only to be led astray by paths and branches popping up in reality, or soaking in a sudden rainstorm, or fighting with three wild dogs. These memories were so distant that they were hardly compatible with the present reality. Everything was predictable: what time the train would pass, what village or town it would reach, or even what kind of people you would meet — there are probably only four types of people on these trails: runners, dog walkers, helmeted cyclists and, a lesser but ever-present number of horseback riders. These four kinds of people, in various combinations, made up almost all of my encounters on the trip. We would encounter, say Gruezi to each other, then pass by carrying on with our own paths. Out of the Rhine Valley, even the river itself began to repeat itself in the same pattern: it entered a regulated channel, with two layers of dams holding the water almost straight surging into the distance. There were no more meandering river beds, and most likely no more floods flooding the valley, or still water lurching around the twists and turns of the channel. The river was tamed in such a project and rushed northward faster than I had expected. When the mountains were no longer in sight and the rivers occupied my view, the words in my mind began to discompose, and I lost words for the reality in front of me, except for the memories of Yunnan that are passively gushing out from time to time. It was also at this point that I stopped the notes I had planned to keep every day. 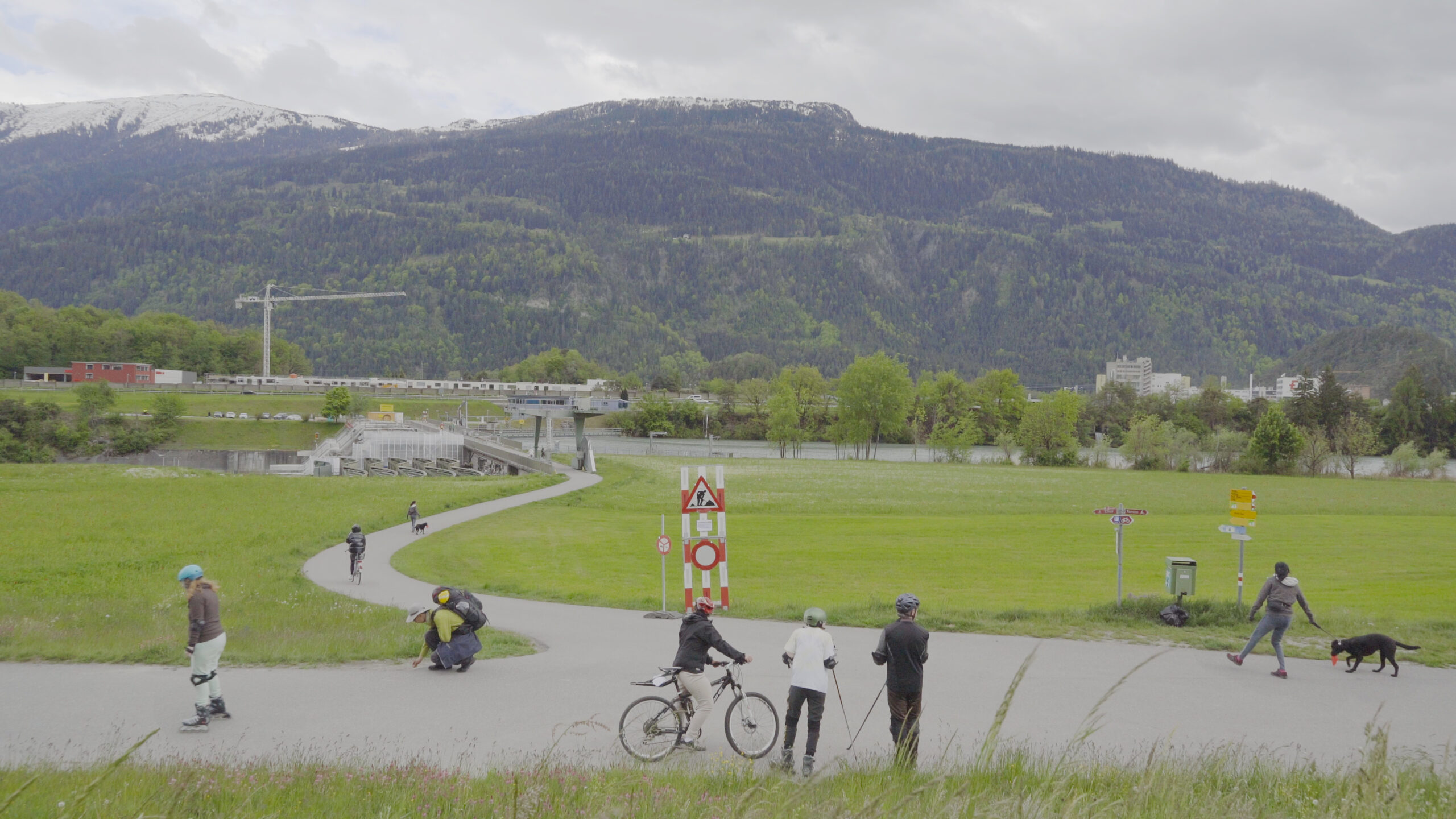 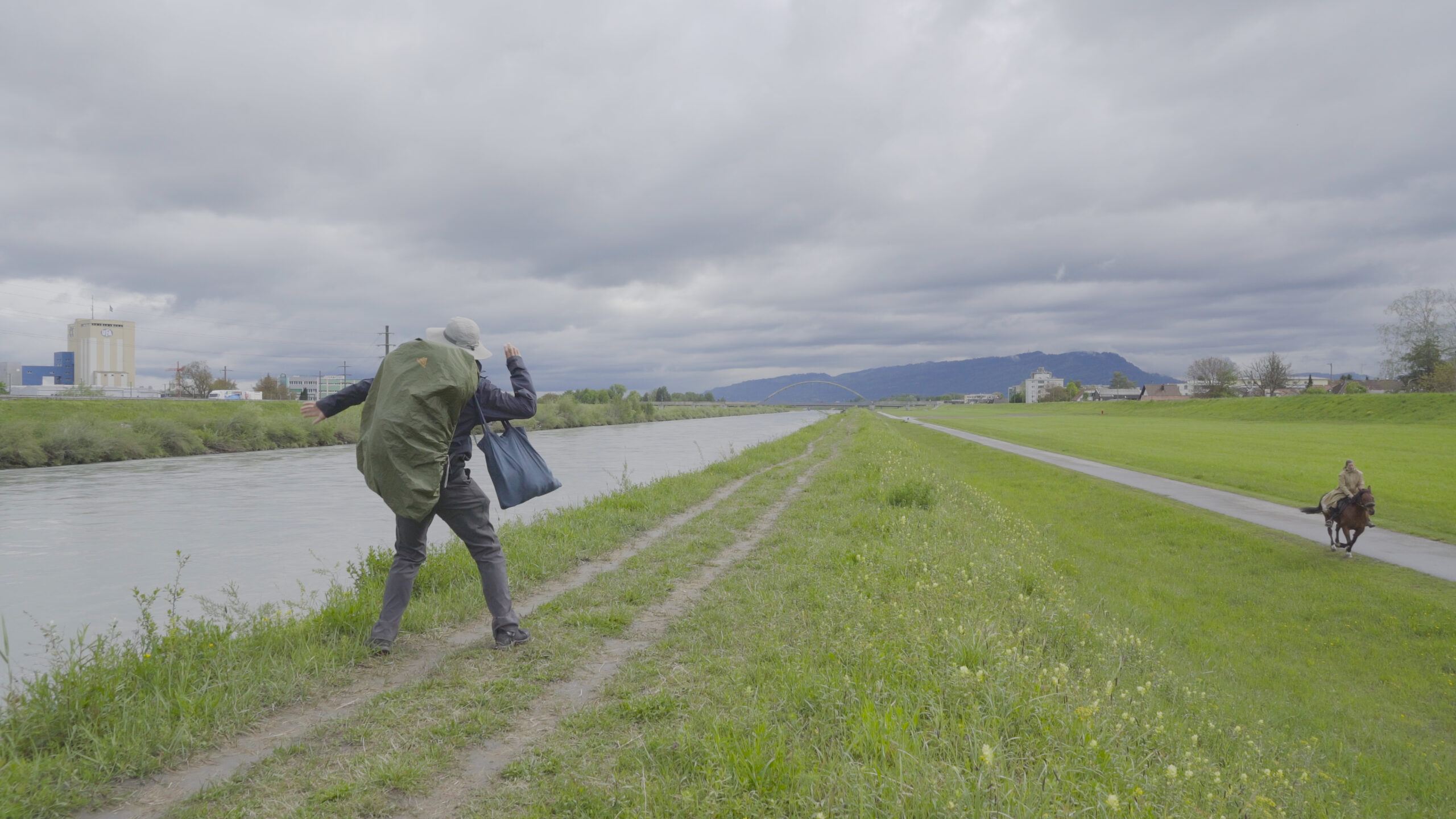 More collapses followed as the mismatch between experience and reality presented in a more apparent form. On May 16, misjudging my strength based on my Yunnan experience, I gave up my plan of a complete on-foot hike after finishing the last three kilometers to Chur, and took a bus to the hotel. May 19, passing through the junction of Switzerland, Austria, and Liechtenstein, the pain in my right foot was so severe that I thought I had a stress fracture. Unresigned, I endured the pain and hobbled forward. On May 20, arriving at the mouth of Boden Lake, I threw my last stone into the lake with all my strength, not knowing that this would be the end of my video. After rearranging my itinerary, I strictly limited myself to 20km a day and prayed that I could make it at least as far as Basel at the border. On May 21, I arrived in the German city of Constance on the shores of Boden Lake. From Constance, the Rhine flows westward from Boden and forms the natural border between Germany and Switzerland. It will take a 90-degree turn at Basel and continue northward at the Hessian mountains and the Vosges mountains between Germany and France, into the distant Netherlands and the North Sea. On May 22, after a venting cry sitting in the bayou, I canceled all further accommodation reservations and caught a train back to Zurich. The planned twenty-day trip thus winded up on the tenth day with haste. 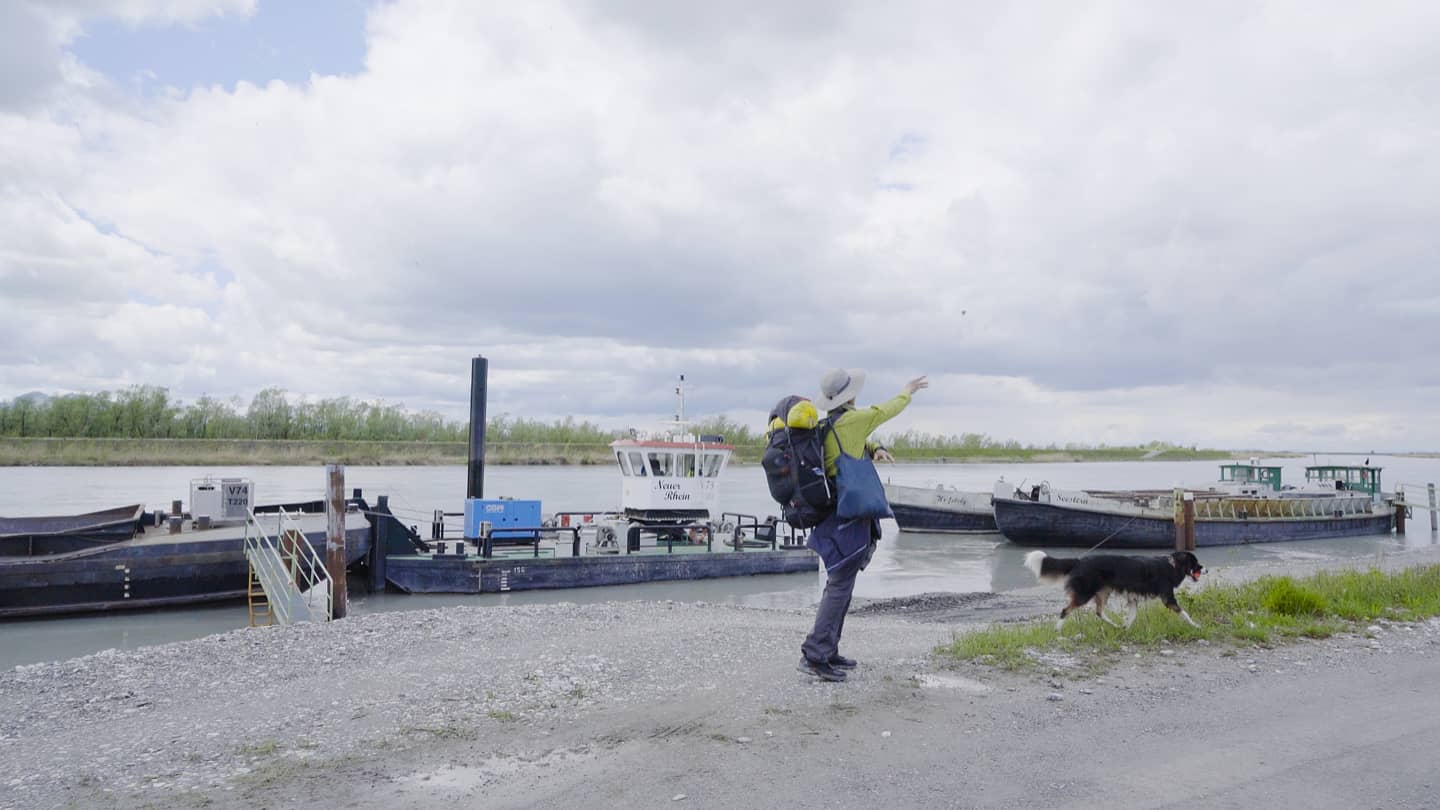 But the end is not without unwillingness. I never imagined in any way that it would end in such a debacle. I thought that my will could drive my body forward, and that I could measure the river and the land with my foot even in pain, and that I could build an inalienable relationship between myself and the objects over the course. The truth turned out, however, my experience lost its voice in all sorts of happenings, words sliding off the surface of objects as my body paddling across the river; no impression was left in the end.

After 20 days, my foot wasn’t getting any better, but I felt I needed to do something as some sort of marks for this debacle: something concrete, not abstract, some marks that were entangled with me. I was once again by train on the Rhine, where the borders of three states meet. As the snow melted in summer, the river rose, carrying muddy sediment that covered the sandbars in the middle of the river that had previously been visible during my hike. On the Liechtenstein side, I stepped into the river with my drifting bag in my arms, feeling the cold, fast-moving water weighing down on me. With a miss-step, I felt a sudden loss of gravity and was carried downstream swiftly. I struggled to reach the Swiss border in the middle of the river and turn back against the surging currents towards the channel. A few minutes later, exhausted, I was stranded on an Austrian beach. Unable to rise from my knees, I crawled to the ground, with my hands grasping the prickly but solid pebbles. 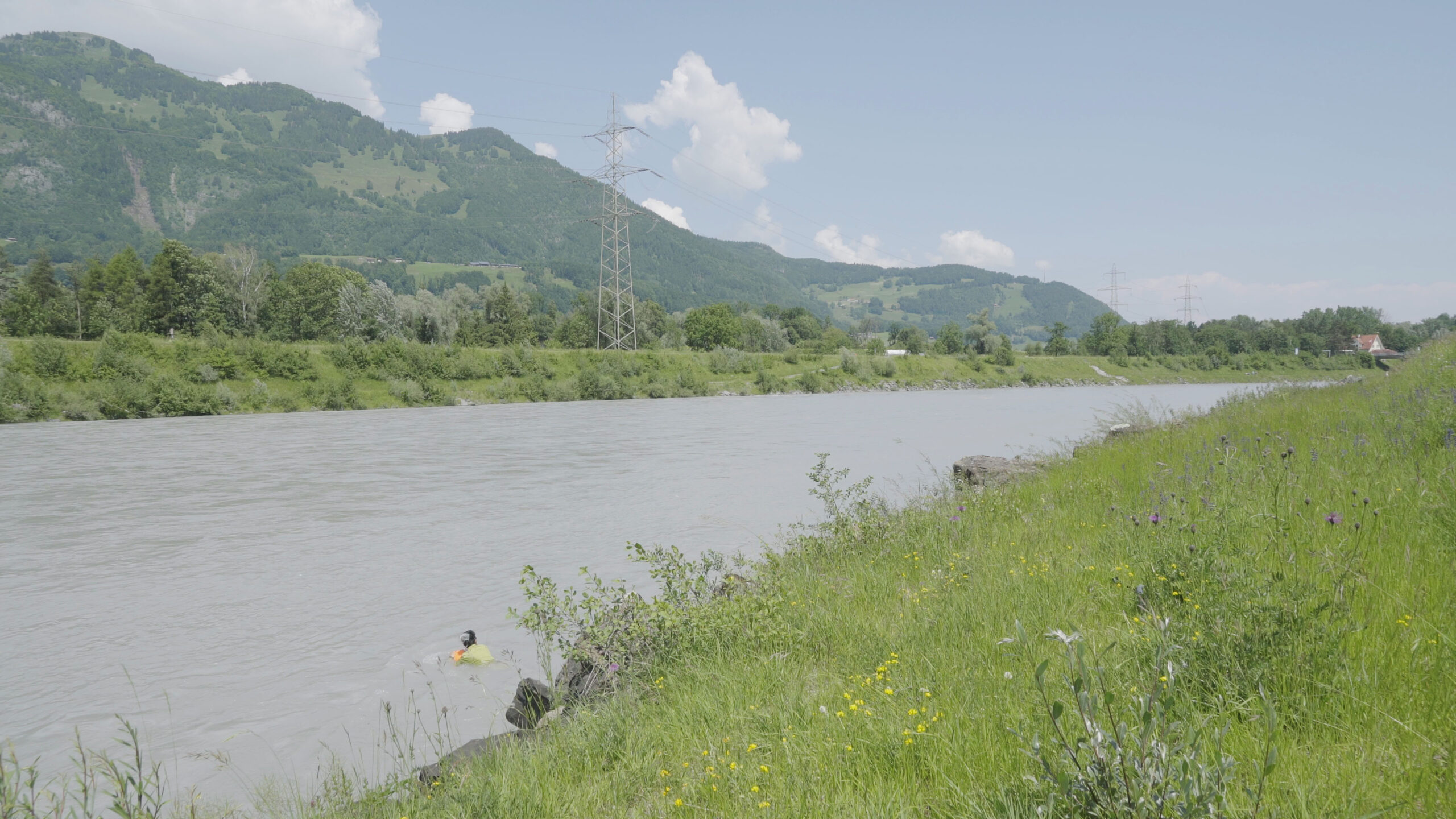