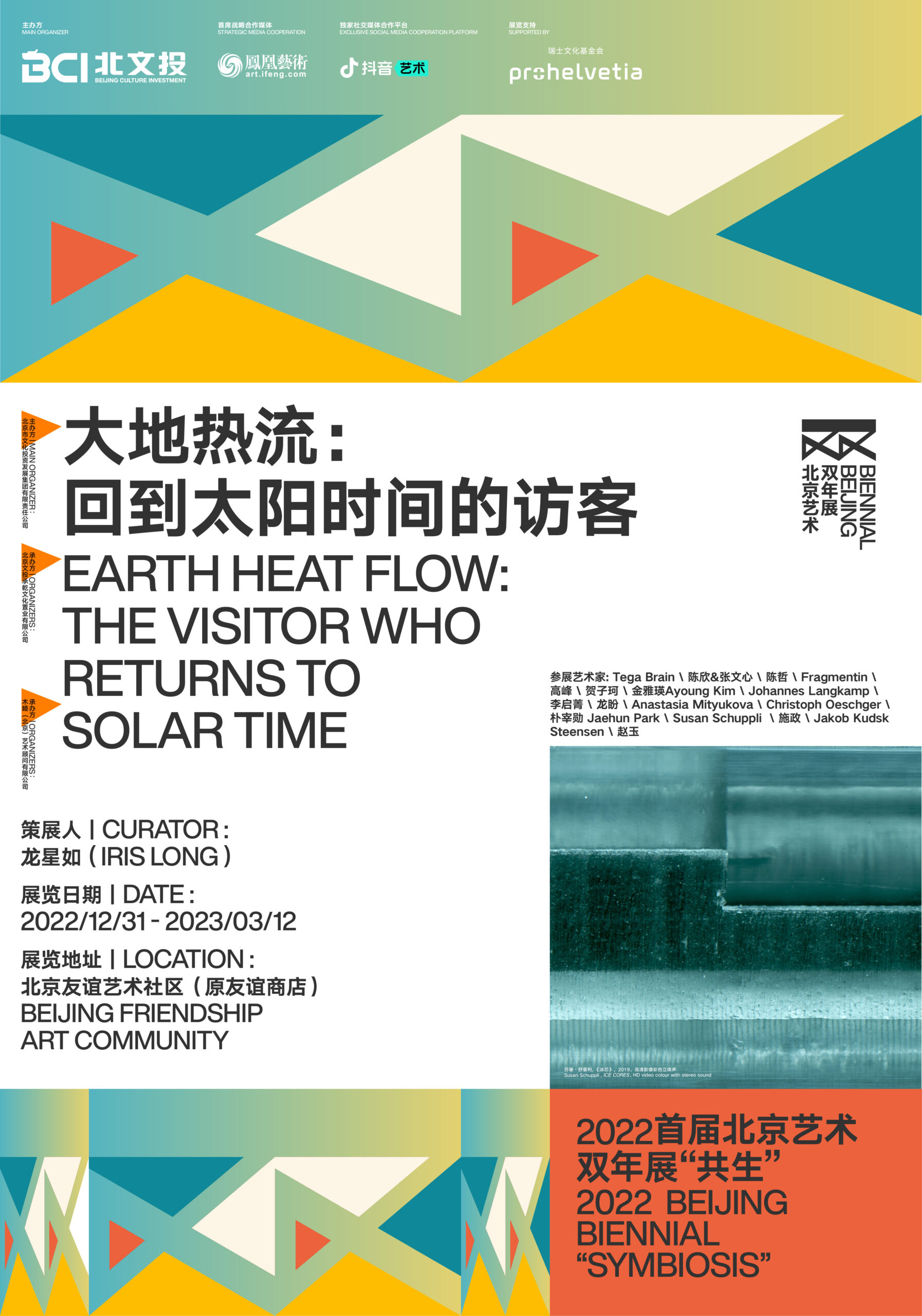 Beijing Biennial 2022, themed “Symbiosis”, aims to reflect on the fate of mankind under the influence of the COVID-19 pandemic, exploring how mankind should build a community of shared future, how human civilization and natural ecology should coexist, and how digital technology and creative design can intermix and develop. “Earth Heat Flow: the Visitor Who Returns to Solar Time” is the art and technology section of the Beijing Biennial. This section invites 17 (groups) of artists to discuss how to understand the technological culture and ecological status quo through the lens of thermal media and invites visitors to take a journey on “melting” from the perspective of dynamic “heat flow.”

Three (groups of) Swiss artists are invited to this exhibition, Fragmentin (with “Endangered Herbarium” featured in the “Live Element” chapter), Christoph Oeschger (with “The Other Side of Ice” featured in the “Thermal Medium” chapter) and Anastasia Mityukova (with “Project Iceworm” featured in “Arrows of Time” chapter). The exhibition invites people to stand in the heat flow of the earth again to understand everything carried by our technology and ecosystem and the epoch witnessed by the vertical space between the solar radiation and the thermal structure of the lithosphere, or, the geographical territory between the polar frozen soil and the equatorial sunshine.

“Earth Heat Flow: The Visitor Who Returns to Solar Time” is exhibited at the Arts and Technology Unit of the First Beijing Biennial.

The exhibition titled “Earth Heat Flow,” based on the unique winter heating in Beijing, attempts to discuss how to understand the technological culture and ecological status quo through the lens of thermal media and invites visitors to take a journey on “melting” from the perspective of dynamic “heat flow.” During the journey, imaginary creatures with heat-synesthesia will experience the daily temperature that human beings are accustomed to, track how heat exists as a foreshadowing of the contemporary scientific and technological system, and speculate on notions of entropy and time – both closely related to “heat.” Each work is included into the “melting” narrative, which may change the object’s shape or reveal hidden things. Melting may be violent or silent, like technology, which is both a dynamic plastic force and a revealing force.

The privileged sunshine in winter of Beijing will be splashed on the “hotter” side of the exhibition hall. The works here discuss how our digital infrastructure (data centers, network switches, and optical fibers) constantly absorb the planet’s energy and build a stable thermal environment. Being Radiotropic describes our dependence on electromagnetic signals with life entities’ reaction to solar radiation. The Copper Tree reminds us how the copper element that supports optical cables and wires is generated from the earth’s veins. Porosity Valley imagines how a living element travels as half a mineral entity and half a digital bit. While Analog Sun Tracking replaces the heated sun in the human visual spectrum with black holes; Saros implies the fatal relationship between the solar flare explosion and the electronic system with a ridiculous fable.

Captured Nature reminds us how the man-made “cold/hot” system continuously supports a more moderate and pleasant living environment. However, these control technologies are also involved in the planet’s natural cold and heat flow for water and wind. Even ocean currents are cooling the roaring machine room, and the neon on which the lithography machine depends also relies on the low-temperature distillation of air by the separation equipment (Do not dwell on that hazy glow). This inlaid relationship of energy, suggesting the fragile and dark side of the man-made technological environment, leads us to the deeper and colder side of the exhibition hall, where the stable environment we created by regulating temperature and heat energy is disturbed and reversed. Life from remote underground servers penetrates people’s skin via liquid (Aquaphobia). Three groups of works related to glaciers depict the history of energy exploitation, cold war facilities, and ancient microorganisms solidified by ice.

When that computer-rendered iceberg collapsed in silence like Greenland Fjord (Melting into Time), or the fireworks in the computer quietly bloomed (Fireworks Universe), we seem to feel that the earth naturally contains the potential energy of entropy increases and the desire for reversing entropy, as well as the tension between the two. As Endangered Herbarium tries to store plants’ life, this storage’s effectiveness goes with the sun’s rhythm. In the chaotic zone before the artificial light sources light up (891 Dusks: An Encyclopedia of Psychological Experiences) and after the natural light sources dissipate, when all the machine-generated words become fuzzy lumps with the thermal paper exposed to the air (A Sigh), people stand in the heat flow of the earth again to understand everything carried by our technology and ecosystem and the epoch witnessed by the vertical space between the solar radiation and the thermal structure of the lithosphere, or, the geographical territory between the polar frozen soil and the equatorial sunshine.

To Melt by Susan Schuppli & Fragmentin

A Guardian newspaper article on Canada caught my eyes. Over the weekend, the purpose-built ice core storage facility at the University of Alberta in Edmonton suffered a series of malfunctions as its triple backup systems failed. Instead of cooling, the temperature in the freezer rose to above 40 degrees Celsius. Within the space of a few hours, thousands of years of Arctic climate history vanished as prized ice cores from the Penny Ice Cap on Baffin Island and from Mount Logan in the Yukon dissolved into pools of water. But what captures my imagination in reading this story is not the double drama of meltdown – the slushy remains of a scientific collection extracted from a frozen world that is literally melting because of climate change—but my discovery that a library composed entirely of “ice records” exists in Canada where I am from. This is a revelation that propels me on a journey that is still continuing today.

The online panel will bring together four artists whose works investigate the notion of “ice”. Using “melt” as a method, the session hopes to generate insights into the knowledge of the environmental change, as well as political discussions about cold climates and the Arctic area.

Susan Schuppli is a researcher and artist based in the UK whose work examines material evidence from war and conflict to environmental disasters and climate change. Current work is focused on learning from ice and the politics of cold. She has published widely within the context of media and politics and is author of the book, Material Witness published by MIT Press in 2020. Schuppli is Director of the Centre for Research Architecture, Goldsmiths University of London where she is also an affiliate artist-researcher and Board Chair of Forensic Architecture.

Fragmentin is an artist collective based in Lausanne, Switzerland, founded in 2014 and composed by three ECAL (Lausanne University of Art and Design) alumni. At the crossroads of art and engineering, Fragmentin’s work questions the impact of the digital on everyday life by investigating these technologies’ disposition towards control and opacity. Fragmentin’s works are often conceived as spaces for discussion on crucial contemporary themes and issues such as climate change.

In the Ice, Everything Leaves a Trace by Christoph Oeschger & Gianna Molinari

As Arctic ice melts, borders shift, once inaccessible places and resources become accessible, and new claims to raw materials and territories are made. The Arctic is changing like never before, from a romanticized image of wild, harsh nature to a technological place full of economic interests. The Arctic has become a hotspot of border shifts and geopolitical interests. The essay film “In the Ice, everything leaves a trace” is a poetic approach to this place and makes the invisible visible.

“In the Ice, Everything Leaves a Trace” is the first outcome of joint research of author Gianna Molinari and artist Christoph Oeschger, as part of their PolARTS expedition. We started in Greenland; there, we recognized that the Arctic is also elsewhere: in the tubes, under microscopes, electronics, and maps. What is in our heads as a romantic image of wilderness becomes a playground for geopolitical and economic interests.

Christoph Oeschger (*1984 in Zurich) is a photographer, artist, publisher, and since autumn 2017 artistic associate in the Department of Transdisciplinarity at the Zurich University of the Arts (ZHdK). He studied media art at the Karlsruhe University of Arts and Design (HfG) and photography at the Zurich University of the Arts (ZHdK).  In 2020 he co-founded cpress films. His most recent publication were the artist’s book Miklós Klaus Rózsa (with Christof Nüssli) and They’ve Made us Ghosts. His work has been shown in various museums including Fotomuseum Winterthur (CH), Zentrum für Kunst und Medientechnologie, Karlsruhe (DE), Centre de la Photographie Geneve (CH).

Gianna Molinari was born in Basel in 1988. She studied Literary Writing at the Swiss Literary Institute in Biel and Modern German Literature at the University of Lausanne. She lives in Zürich, where she co-founded the art action group “Literatur für das, was passiert” (Literature for World Events), with the aim of helping refugees. In 2017 she was awarded the 3sat Prize at the Ingeborg Bachmann Prize, and in 2018 she received the Robert Walser Prize. Her first Novel “Hier ist noch alles möglich” (Anything Could Happen Here) was nominated for the Swiss and the German book award.