When do you return to a place to pursue an idea further? Swiss visual artist Guillaume Pilet shares how he fell in love with China during his three-month residency.

In Lausanne, Guillaume is a two-time recipient of the «Swiss Art Award». In Shanghai he set out to learn something new and used blue underglaze, a traditional Chinese technique, to decorate porcelain. At the Shanghai Institute of Visual Arts (SIVA) he had access to the ceramics workshop. On the surface of everyday objects as vases and plates he traces his storylines playfully juxtaposing traditional and modern elements, such as a scholar’s rock and a hamburger. At the end of his residency, he displayed his work at a courtyard style teahouse on campus.

Andreas Gysin was born in Zurich and is currently based in Lugano. His artist duo Gysin-Vanetti was listed among «Collection Cahiers d’Artistes» by the Swiss Arts Council Pro Helvetia.

«I consider this art practice as an experimental pool». Experimentation lies behind the glorious façade of digital reality and is reflected in Gysin-Vanettis’s kinetic and interactive installations, be that split-flaps, numerical digits, or geometric street signs. Each part of their work functions as a small glitch in one matrix, displaced from its original function but gaining a new reading of the abstract forms.

Andreas chose Shanghai as his destination, for it is the natural habitat of screens and LED technology. He benefited from his stay to work around the «found geometries» in the city. During his residency, he spent most of the time at Chronus Art Center（CAC）’s lab, however, without missing the opportunity to observe the city and scout electronic parts.

Following their first residency with Pro Helvetia Johannesburg in 2008, the artist duo Marianne Halter & Mario Marchisella returned for a second residency with Pro Helvetia Shanghai in collaboration with OCAT Shanghai. The duo has regularly worked together to create performances, videos and installations about urban spaces and everyday situations. Riding two bicycles, they got to know Shanghai from its old town to the modern parts while passing through different layers of the cities’ history. For the first part of their residency, they kept exploring the city to find inspiration. Only towards the last weeks of their stay, they started creating their work.

During their residency, the duo gave a lecture at OCAT Shanghai and created a new video work recording an in-situ performance. They have displayed their work «FINE» (2017) at dream video 100 during West Bund Art & Design. In December 2019, they’ve performed Notte di Ballo with Duo Belvedere (solo) during PHSH x TANC’s residency communication event at ZiWu, Shanghai.

(All videos above are taken by Action Media. All works credit to the artists.) 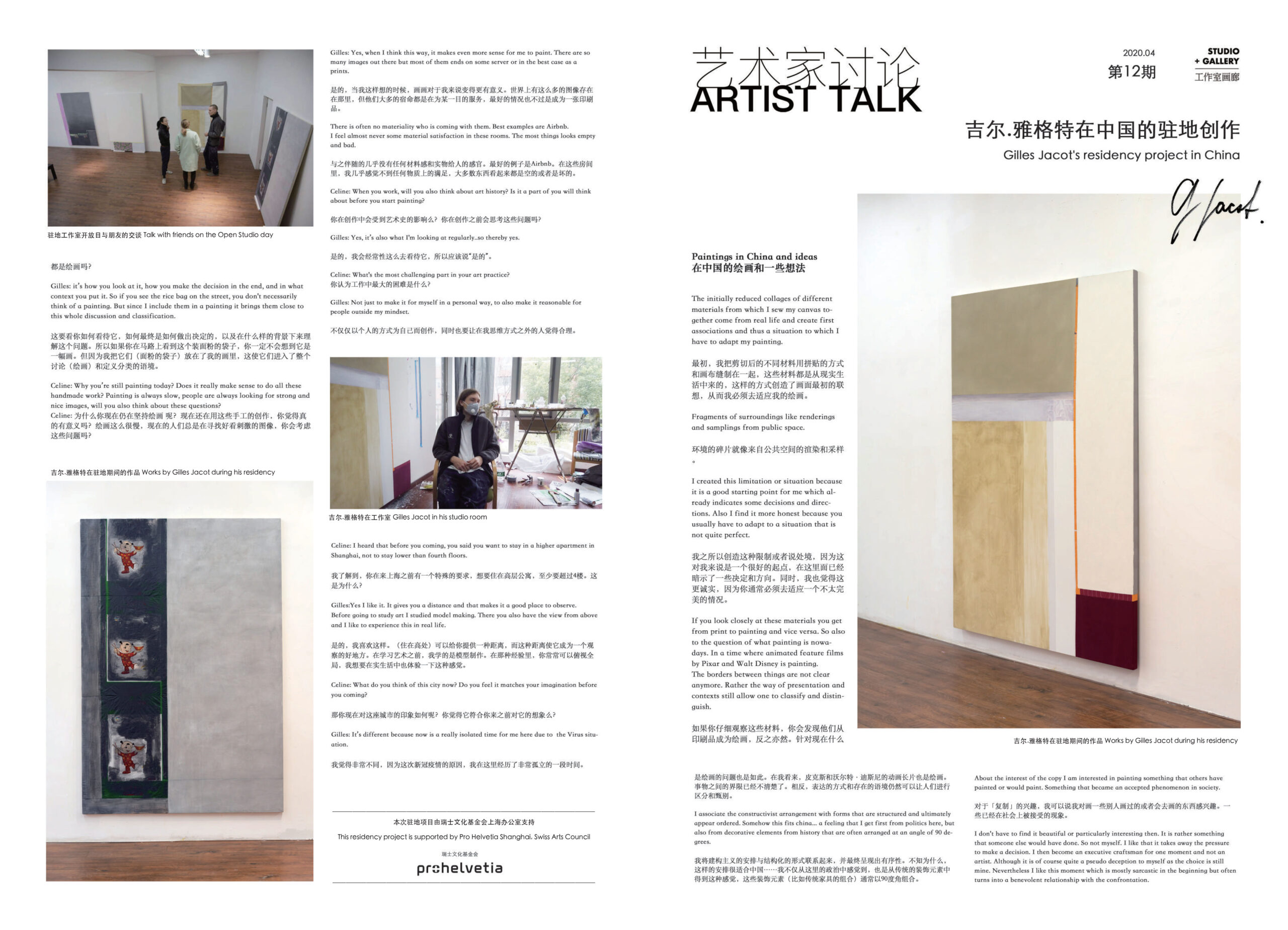 Gilles Jacot’s residency looks quite different from the way he imagined. Due to the Covid-19 epidemic, quarantined Shanghai makes him feel isolated. He has held an open studio during the last week of his stay and interviewed with his host.

Gilles’ motivation lies in the confrontation with new environments filled with a multitude of cultural and social phenomena. To solve questions often overlooked by common media, in the recent one year, he has switched to larger canvas with a mixture of different visual languages and techniques. This tension he has observed of the surroundings has added a new emptiness to his paintings.

Probing into Shanghai’s alleys, he used a sewing machine to connect the canvas and packaging materials collected from daily lives. In his collage painting, the cartoon symbols remind of a local Pixar or Disney figure, and the decorative patterns reflect a constructivist order that fits well into China’s history. The word COVID may appear as a riddle in the corner of one artwork, and gets painted over the next minute. Just like the mark this special time has left him, obscure but unforgettable.

Between Mountains, Hills and Lakes